A place to share what has helped you in your life with migraines, what has hurt you and to offer support

Kindness matters! Do something kind today. It makes everyone feel better including yourself!!!

And since we're doing photos, I can't not share the ones that inspired us to get Ronnie to take the photos of Jose and me in the first place! Meet my special puppies, Liberty and Teddy Bear!

We have had Liberty for 6 years now, and she is between 7 and 8, as she was a shelter dog found on the street. She chose my parents rather than the other way around! When they went to the shelter, she let them know that she was the dog for them! She is a sweetheart, who takes very seriously her job of patrolling her backyard (emphasis on HER backyard that she just happens to let us borrow!) and scaring away all hawks, motorcycles, gardeners, and sprinklers! The hawk is because my mom has an evil parrot, and hawks are known to swoop down and take parrots (why can't they take Chica with them?), so Liberty has learned that my mom is nervous about the hawks and has taken over the hawk patrol duty. As for the motorcycles, she clearly had some bad experience on the streets, and since the gardeners' equipment sounds like motorcycles, she doesn't like them either. But why she hates the neighbors' sprinklers? We can figure it out! If you can, we'd love it if you would let us know!

And now she has taught Teddy Bear to bark at the sprinklers, though he has no idea why he is barking! He has, however, quickly picked up on the need to patrol for hawks. The only problem is that he isn't so good at discriminating between hawks and everything else in the sky, so anything that flies gets barked out vociferously by Teddy!

We got Teddy in March after trying hard to work with a rescue dog who was afraid of my dad when he moved in because my dad was on a walker, and when my dad got off the walker, Alfie never gave up that fear. So we had to give him back to the rescue group, and they alerted us to the fact that a woman was caught with over 50 different dogs in her house! She has a 2-acre lot, but she wouldn't let them stay outside overnight or if she went away, so her house was a health hazard! She was given a week or so by animal control and the health department to find new homes for the dogs, or they would be taken to the shelter and probably mostly euthanized.

So my parents took Liberty to the house, and she helped pick out her brother, whom my mom named Teddy Bear. He is the cutest guy, not just as in the photos, but in his whole behavior! He cuddles up with us and will start pulling everything out of my dad's shirt pocket while curled up with my dad! He is a very fast learner, and we quickly taught him to sit, shake, lie down, and stay until he is released to get his food. I want to teach him to roll over, but I made a bad start of it, so he's kind of nervous when I get close to him while he is down, so we're back to getting him comfortable just staying down. But he does all that without being asked, and he bounces from step to step, often waving both paws in the air to shake! He just makes you want to give him a big hug, which he does get plenty of!

The one problem is that the woman who had him got him a month before we got him from her, and she got him because people just moved away and left him! Who would ever want to leave such a sweetie as Teddy Bear? But the problem is that he was obviously abused by dark-skinned males. Fortunately, he adores my dad and likes Jose (at least he did, but Jose has been working in the mountains all summer, so we just hope that Teddy remembers that he likes Jose!), but when dark-skinned men, whether Latinos, Filipinos, or blacks, come over, he gets upset. We first noticed this at a children's birthday party when he was fine while the girls played with the pinata, but he freaked out when the Latino boy took the stick. Later, we've noticed him upset at other dark-skinned men, and he especially freaked out with a male friend from Africa. Once we explained to Doudi how we got Teddy Bear and that he clearly had been abused by a dark man, Doudi understood, but we feel bad because it rather looks like we have a racist dog! He's not racist, just scared!

And let me post a couple of my favorite photos:

Teddy Bear is on the left and Liberty on the right in this one, which was taken in my backyard. 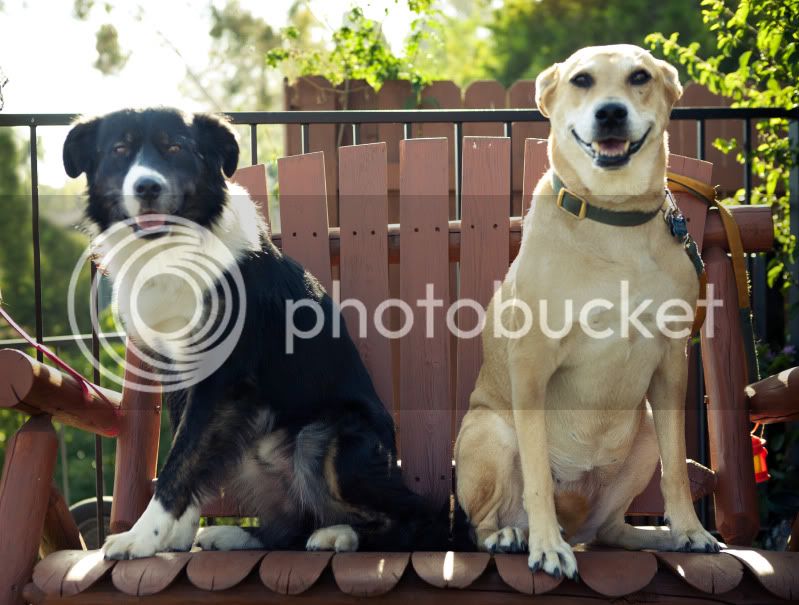 I've got Teddy, while my mom has Libby in this one. You can also get a glimpse of the evil Chica on my mom's shoulder. Just how evil is she? She knows that I can't go near her or anyone she is on because she will jump off that person's shoulder or the stand in order to try to get to me in order to bite me. So of course, sensing that I really like being near Jose, she uses every chance she can get to climb onto his shoulder! And then she stares at me and lets me know that she has stolen my man! My mom thinks I'm giving her too much credit, but a close friend who has studied birds says that the larger parrots really do have that kind of mental capacity! 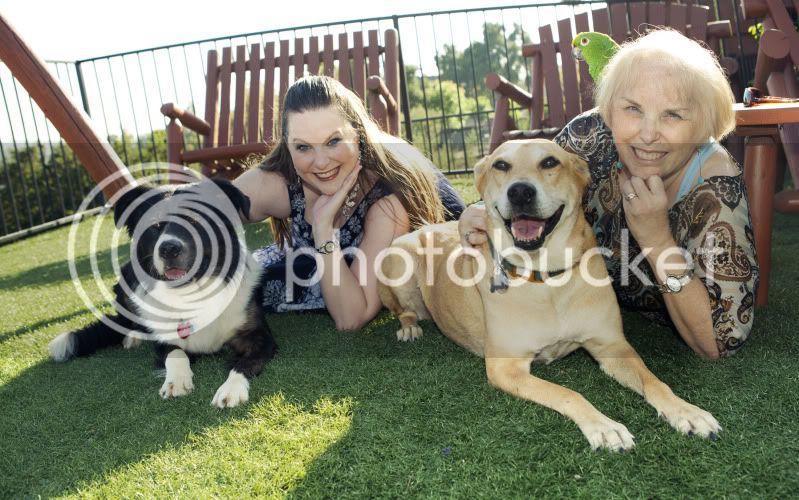 And finally, check out our "cool dude," the Teddy Bear! The glasses stayed on all of 20 seconds, just long enough for Ronnie to get a quick picture! 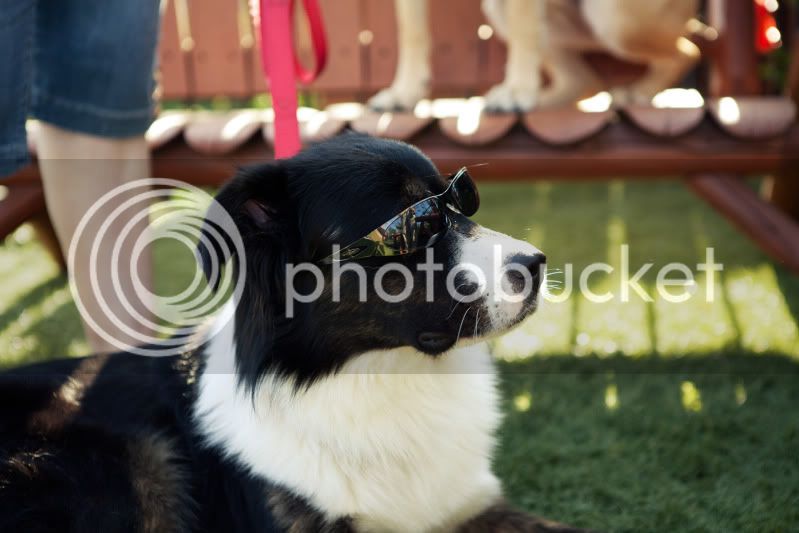 Gorgeous piccies and terrific stories, Vicky! I dunno who's cutter, Libby or Teddy Bear, lol
Let's settle that they are both the sweetest, handsomest doggies under the sun

Even the evil Chica is so cute, lololol

yeah, I believe you about the parrots being so "territorial" - as my friend once took care of similar green parrot from a garden store,
and this one also perched at my friend's shoulder, ready to bite whomever dared to come close, yikes!

I love to listen to your stories Vicky, I think you should write a book !
You are wonderful person, and despite the pain, migraines, your life is amazing!

How is the wedding coming along? Still a lot to do, I guess?...